It is quite intriguing how Windows 10 took off shortly after its announcement on the 29 of July 2015 and it is without a doubt that it’s the best Windows ever – which is what a sequel of any operating system should be anyway – unlike those that came before it (I’m looking at you Window 8/8.1).

Microsoft currently boasts of over 200 million devices currently running its flagship operating system, which is a humongous amount if you ask me. Notwithstanding, the market share of Windows 7 still surpasses that of Windows 10.

However, given the success rate of Windows 10 in the short space of time, we’d expect it’s usage share to eventually grow over the next few years to beat Windows 7 – just the same way the latter took over Windows XP.

I like to attribute Windows 10 to “8.1 done right” particularly because it’s more or less a refined form of the latter – with still a lot of improvements under the hood.

Given the entire nature of the Windows operating system as a closed — money/data hoarding platform, it’s mostly fair that people that value their privacy or are otherwise displeased with Windows 10 will look out for the better alternatives while still offering a similar experience akin to what the 10’s GUI offers.

In this article, we’ve picked 5 Linux distros that will give you the best possible Windows-Esque desktop experience on Linux.

Check out best 5 Linux Distros that are just perfect 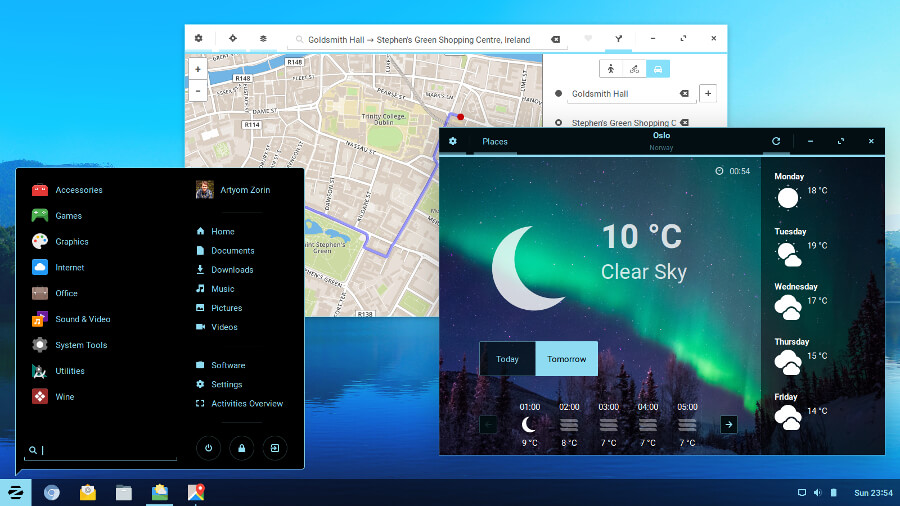 Zorin OS is perhaps the most prominent of the bunch and has quite the manpower with a standardized development cycle (one that is similar to Ubuntu LTS and short term releases).

Once Zorin Linux distros installed, it will make you feel right at home as it has that generalized Windows look and for a user coming from Windows. You almost will be able to go wherever you’re most fond of visiting on your Windows PC.

It is noteworthy that Zorin shares the same codebase as Ubuntu and uses a heavily modified DE dubbed Zorin DE and based on Gnome 2.

By default, Zorin OS is meant to look like Windows 7, but you have other options in the look changer which are the Windows XP style and Gnome 2.

Better yet, Zorin comes with Wine (which is an emulator that allows you to run win32 apps in Linux) preinstalled and many other applications that you’ll need for basic tasks. 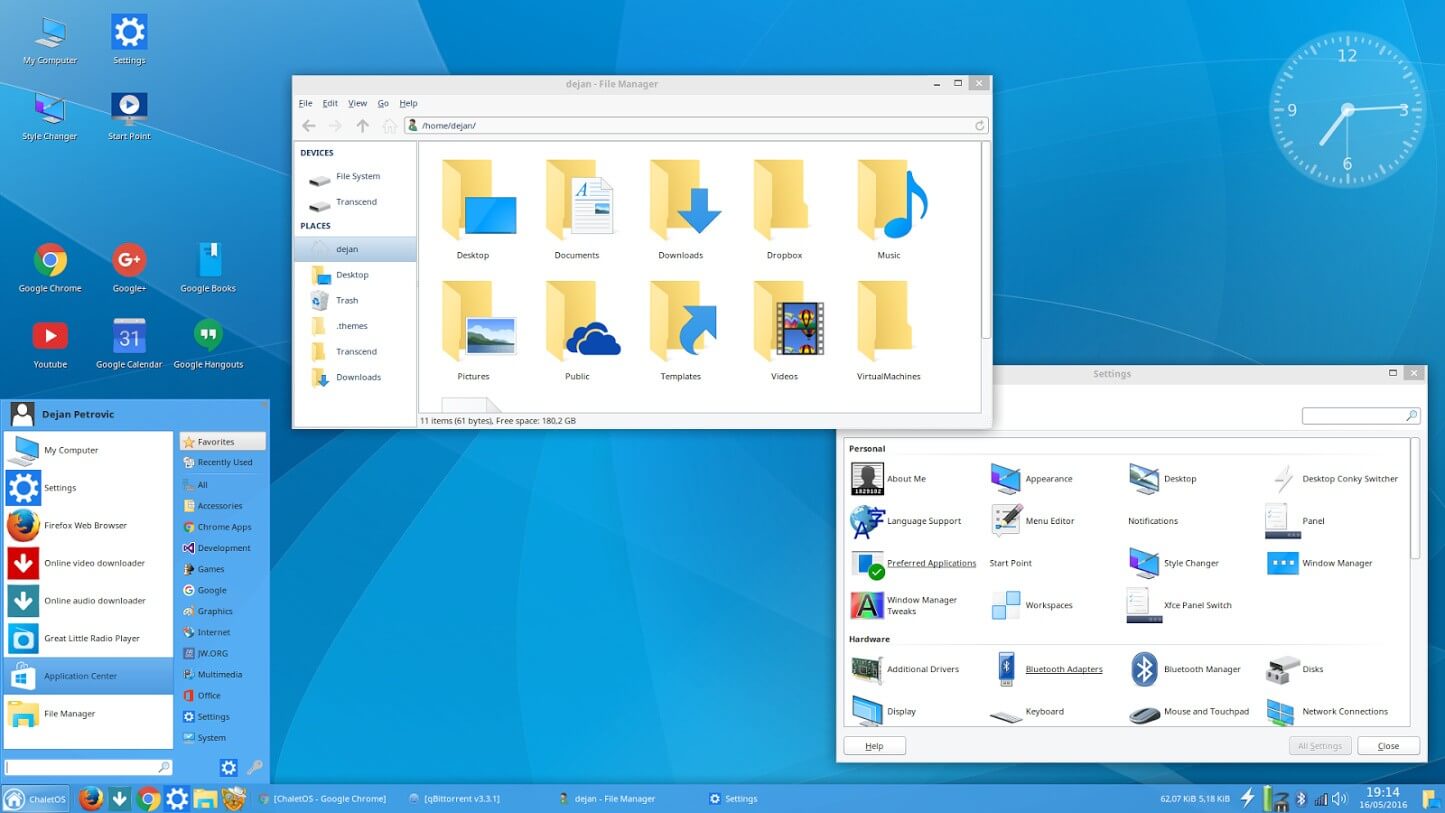 Chalet OS is a fairly new operating system that aims to steal you completely from Windows. The OS is by far the most aesthetically pleasing of the bunch – out of the box.

If you thought Windows 10 was quite the looker, give Chalet OS a try and you’ll almost never look back. The chalet comes with a complete and unique customizability set which is quite comparable to that of Zorin OS but much more extensive and consistent all through the operating system.

Given that Chalet OS is a relatively new operating system, you might be a tad unwillingly to give it a shot, but believe you me, I’ve test-driven it for the well part of a week and I can very well say the stability is top-notch and comparable to the rest of this list which is why I gave it the number 2 spot.

The latest Chalet image is based on Ubuntu 14.04.03 LTS which means you’ll continue to receive updates and security fixes for the next three years now.

The standard edition uses a slightly reworked XFCE DE (which is known quite well for its fairly lightweight nature and stability).

Chalet OS is easily a contender for what goes on your PC, eventually. Watch the video below to see what gives and be sure to check out the rest before you make a final decision.

As you might have guessed it, the operating system comes in a 32/64bit package; we advise that you download any of the single ISO and not the combined ISO image file (as it failed to boot for me).

You also have Wine preinstalled in case you need to run Windows apps as needed. 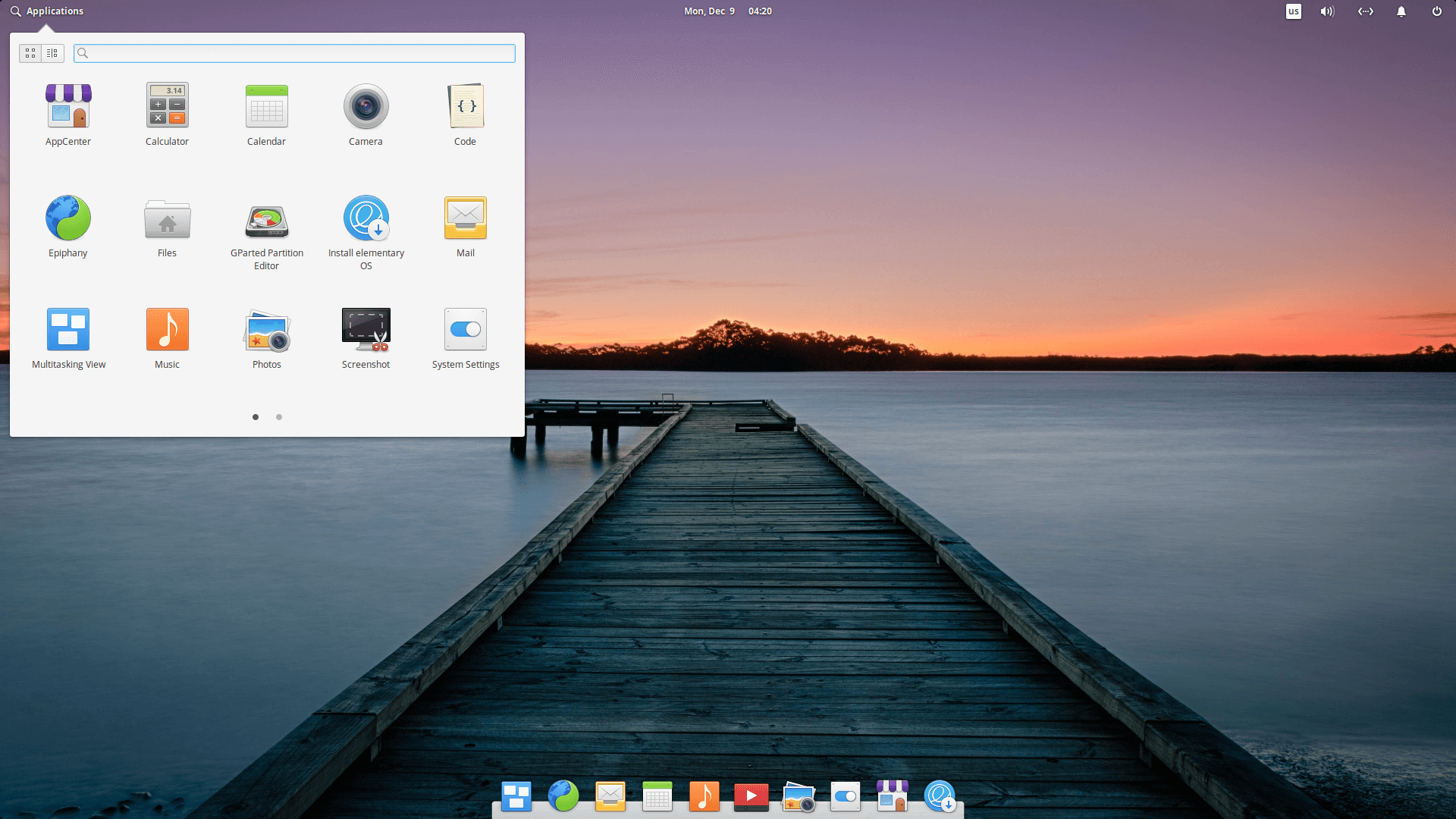 Elementary OS is one of the many options as a fast replacement for Windows and MAC users alike looking to migrate to Linux.

However, eOS doesn’t have the same conventional windows-like UI like the aforementioned distributions (why it made the third on our list).

The operating system is extremely solid and will easily grow on you once you begin using the Pantheon DE (which is elementary’s home-grown desktop environment).

Pantheon is more or less a MAC lookalike and will be mostly befitting to users coming from OSX, however, that doesn’t rule out the fact that Windows users can as well enjoy the distro as much.

The most recent release of Elementary OS is based on Ubuntu LTS 14.04 which, of course, means that you’ll be getting updates and security patches for the next five years as it is with most Ubuntu LTS releases.

The latest release is codenamed Freya (named after the Norse Goddess of Beauty, Love, and Destiny) and it’s available For the two most popular PC architectures out there (x86, x64) and quite lightweight too.

For optimal performance, it’s advisable to have a PC with at least 2GB of RAM and a dual-core Intel SoC or an AMD equivalent.

You can head over to their website later to find out more. In the meantime, watch the short video overview below. 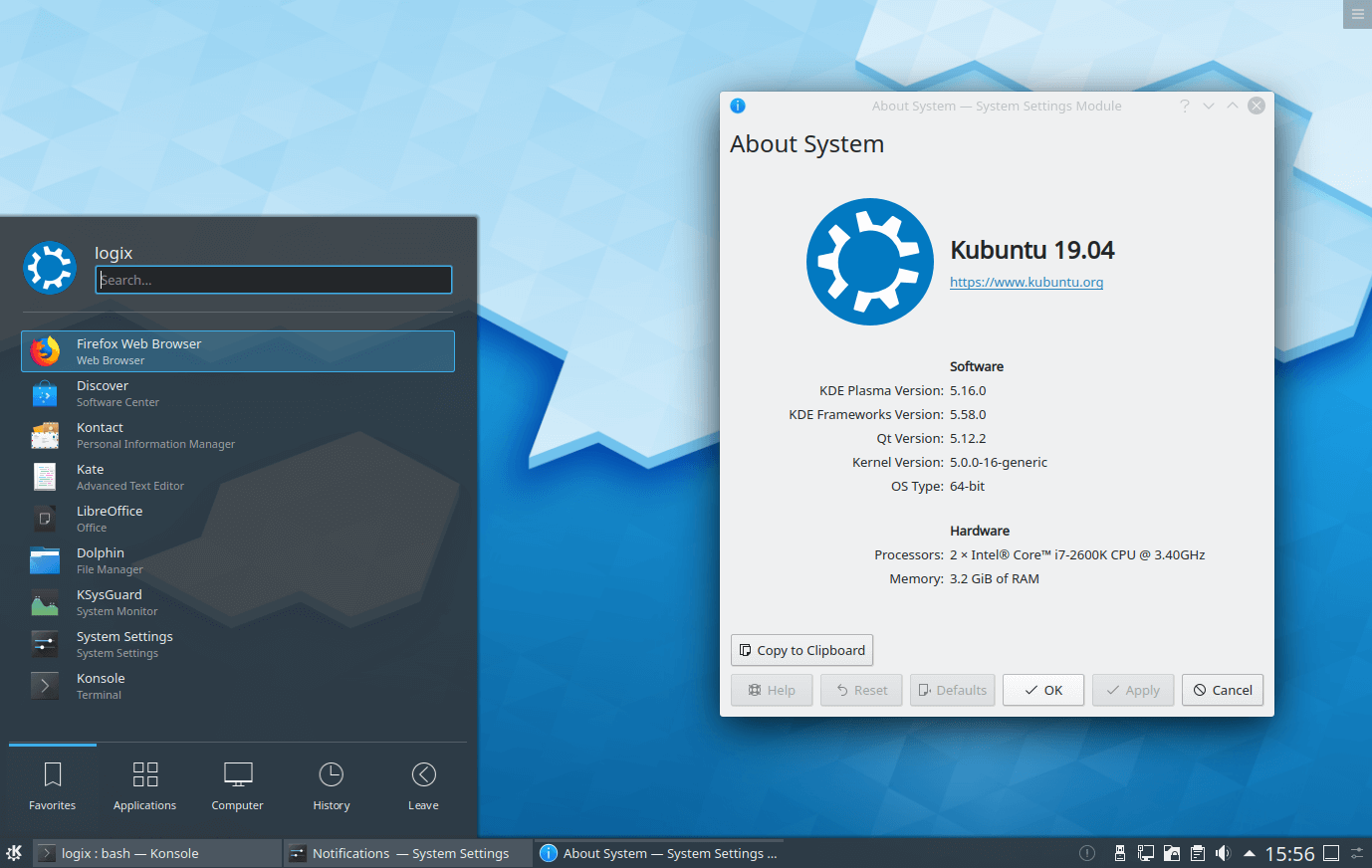 Kubuntu will be your go-to distro if you’re looking for extreme reconfigurability with an app for everything outside the box.

The distro comes with the KDE desktop environment and has for long been an officially supported branch of Ubuntu with KDE-specific applications for pretty much everything you’ll need to do.

It’s easy to be quickly submerged in the KDE experience which is unlike any other. Watch the video below to get a quick overview of the feature set of the operating system.

The flagship desktop experience is tag Plasma and it’s currently at version 5.5 which features a seeming flat UI all through the operating system.

The KDE Plasma experience is, however, evolving to be a more rolling type of release for those that want the latest and greatest of KDE under the moniker KDE Neon which was recently established by the former maintainer of Kubuntu.

So whatever the case may be, if you decide to go with Kubuntu, be sure to keep an eye on the KDE Neon development (which is currently in beta) so you may know whether to switch or not.

It is noteworthy, that the KDE Neon experience will eventually evolve to use the up and coming 16.04 LTS base which, of course, means updates and patches for the next 5 years.

KDE apps are built using the Qt framework which is known for having strong cross-platform support and also allows easy interoperability with other platforms.

Mind you, Kubuntu is not exactly lightweight and your system must have ample resources to be able to effectively run the OS as it features animations all through (which can, of course, be disabled but will strip down the Kubuntu experience). 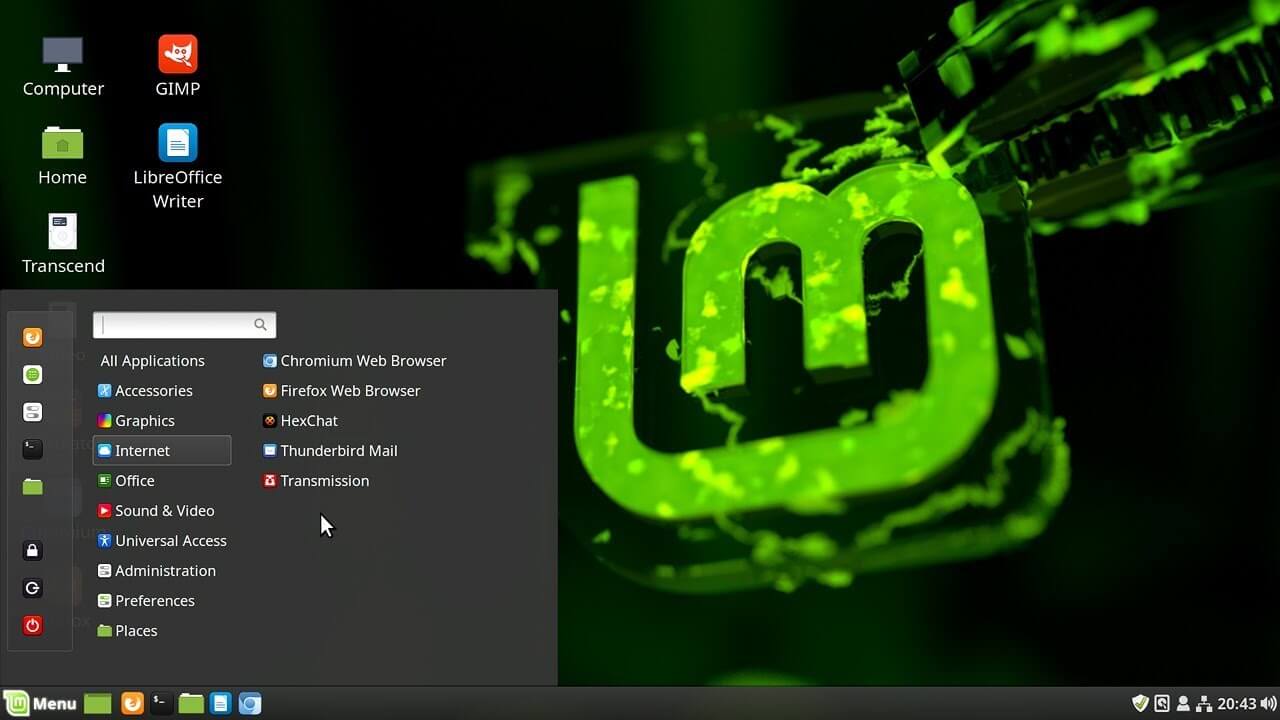 This list wouldn’t be complete without Mint in it. Let’s just be fair about that. Linux Mint perhaps has an edge here for being the second most popular operating system for newbies. This is not too much of a surprise (putting into consideration the original vision of Linux Mint devs – which is essentially an operating system that has absolutely no learning curve to start working immediately).

Linux Mint is based on Ubuntu and essentially shares a high percentage of the Ubuntu codebase. Mint has been fondly called “Ubuntu done right” over the years which is certainly true when you look at it from the perspective of a newcomer to Linux.

Mint will make you feel right at home once you get a hang of the fair amount of navigation difference that makes it differ from what you’ll mostly find on Windows.

Cinnamon is an in-house DE that ships with Mint, However, there’s the KDE, Mate, and Xfce variants (all of are configurable to the very core).

This brings us to the end of our list and while it’s not exactly comprehensive. You can be sure that you won’t go amiss with whichever of the aforementioned distros you finally settle with.

In the event, you come across issues installing them or any challenge. Whatsoever, drop your comments about the best Linux Distros for Windows users in the box below and we’ll get back to you as soon as we can. 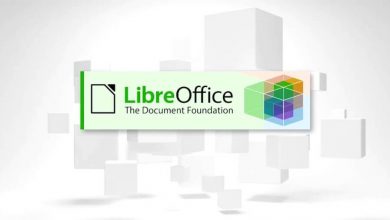